If you followed me on Instagram (@my_attempt_at_adulting) in September and October, you witnessed my journey as I attempted to eat “close to vegan.” Now I say “close to vegan,” because my diet wasn’t strictly vegan. Instead of completely removing meat (and it’s nutrients) from my diet, I decided to allow myself one small fillet of salmon each week.

When I told people that I was attempting veganism (as a way to eat healthier than my current diet), they stated the many reasons why they would never try it. For me, though, there wasn’t much I had to change in my diet. Since I’m lactose intolerant, I often used almond milk in meals such as my overnight oats or cereal. I didn’t each much meat, mostly chicken breast for lunches. I mostly used eggs when I baked banana walnut bread or blueberry muffins or homemade cookies. And the only time I really had ice cream was when Giant would have 3/$8 sales on Haagen Daz ice cream (I know it has dairy, but I don’t always let my lactose intolerance define me).

Going into this new diet/lifestyle, I didn’t think it would be that challenging. And to be honest, the only thing I struggled with was not being able to eat milk chocolate. I was positively challenged to create new dishes that didn’t revolve around meat and dairy, and some delicious dishes came out of it. Even more, it allowed me to view my eating habits from a different perspective. For instance, before I didn’t realize how much I ate junk food despite having a “healthy diet.” By abstaining from snacks and desserts that contained dairy, I reached instead, for healthier options like nuts. And it was small decisions like this that allowed me to lose a couple of pounds as well. 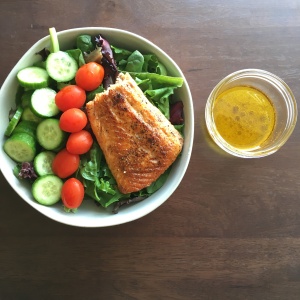 During my “vegan” journey I tried to get into different food substitutions that were created for vegans. I tried using tempeh in a dish. I had to throw it away, I couldn’t get over the fact that it was basically fermented soybeans. I didn’t even try tofu; I hear it’s good if cooked correctly, but I’ll take their word for it. And since I was skeptical about vegan cheese and the like, I didn’t try those products at all. Surprisingly, I had an impossible burger from Founding Farmers and it was so amazing!

Here are some of the foods that I made/ate while I was eating “close to vegan:” 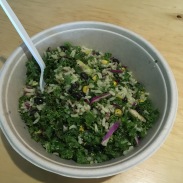 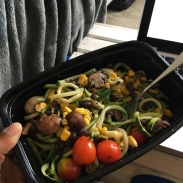 Would I permanently adopt this lifestyle? Probably not. However, I will definitely adopt some of the lessons and concepts of veganism. As someone who is anemic, I cannot eliminate meat (which contains iron) from my diet but will limit how much I consume each week. Overall, it was a good experience. If you do try veganism for a short period, make sure you have a support system that will help you during this journey. I know all too well how hard it is trying a new diet/lifestyle while everyone around you is eating/living almost contradictory to yours.

If you want me to do a post on some of the meals I made during my attempt at veganism, comment below. For those interested in veganism, I want to give you resources and point you towards others that can help you during this transition. If you liked this post and want to see more, like and subscribe to my blog. I post every Wednesday (except this week), bringing you everything from book reviews to recipe posts to posts about budget traveling…so you don’t want to miss a thing. Thanks for reading!

One thought on “My Attempt at Veganism”

Last week, I started listening to "30 Things I Love About Myself," by @radhikasanghani. It's nearly 11 hours long and I have two hours left lol ⁣
Money Mondays Tip #2: Buy in bulk (when it makes sense).⁣
Hey everyone! ⁣
Before I moved into my home, I went to Lowe’s to find a washing machine and a drying machine. I researched which machines would not only fit my laundry room but had the specific features that I wanted. ⁣
I’m back with my Etsy shop!⁣
And we’re live. My #etsy shop is now officially reopened. Click the #linkinbio to check out wha I got. ⁣